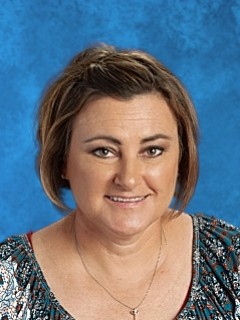 Master's Degree from The University of North Alabama (1996) in Language Arts / Education.

I grew up in Tuscumbia and am very proud to still call Tuscumbia my home.  I am very blessed to be married to my husband, Tommy.  We have been married for 25 years.  We have also been blessed with four wonderful children:  Kierstan (23), Lauren (21), Brayden (19), and Landon (18), who have all attended Tuscumbia City Schools.  I am also a huge animal person. I have a rescue dog named Alice Ann, a golden retriever named Luna, a Scweenie named Lola, and three mini-goats named Pepper Rue, Bindi Blu, and Trixie Belle. I love spending time with my family, being a mom, running, traveling, listening to music, going to concerts, and watching baseball.  I am a Christian, and I am a member of Parkview Baptist Church in Tuscumbia. This year, I will be teaching Honors English 9, Creative Writing, and Senior Advanced Composition and Speech. I am the Key Club sponsor at DHS. I have also been coaching Cross Country at DHS for 13 years.

I began my teaching career at Deshler in 1993 right after I graduated from college. This year, I am beginning my 30th year of teaching at Deshler.